There was no Script Slam this year, because we had no competition. What we did have was 'The Pick of Pint-sized Plays' show featuring eleven plays from the past 13 years of Pint-sized Plays.  We did two shows - in Narberth at the Queens Hall and in Fishguard at Theatr Gwaun.

Great audiencess for both. And here are some videos of the Fishguard show:

We now have the results of our virtual Script Slam as voted for by a worldwide audience!

The Next Ivan Sharansky by Jim Geoghan 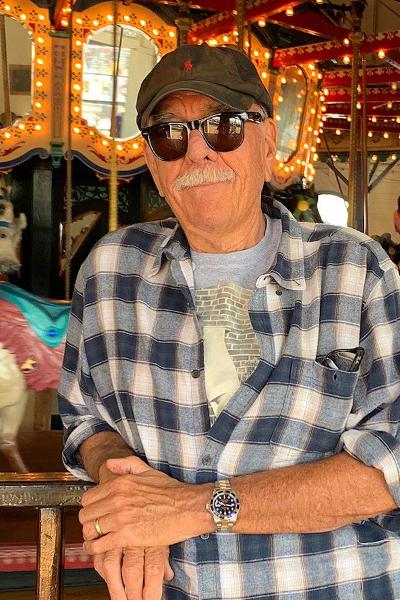 Here's what Jim has to say about The Next Ivan Sharansky:

My best plays are usually about things that actually happened by people I know.  I created The Suite Life of Zack and Cody and The Suite Life on Deck for the Disney Channel. We used a fair number of extras on every show. One of them was an elderly man. He moved slow, almost never spoke to anyone, and never looked happy. One day he looked especially sad. He told me he auditioned to play a dead body and did not get it. To make him feel better I said "That's probably because you're so full of life." And he said "Yeah... that's what I think." I knew right away it was a short play.

Dating with Dostoevsky by Chlöe Banks 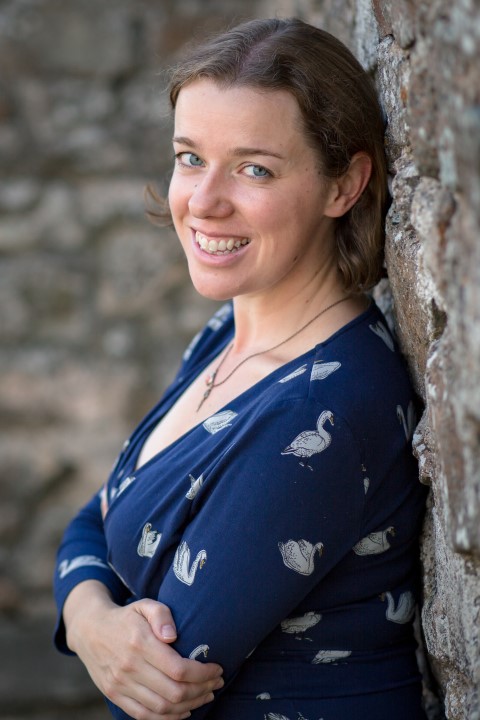 Here's what Chlöe has to say about Dating with Dostoyevsky:
Being selected as one of the six winners of Pint-sized was amazing. I know it's a very popular competition and Dating with Dostoyevsky was my first attempt at writing a script so it was such an encouragement to me. To be voted third in the Script Slam is a wonderful cherry on top - thank you so much  to all the organisers, actors and people who voted!

How Did We Do? by Angela Pressland 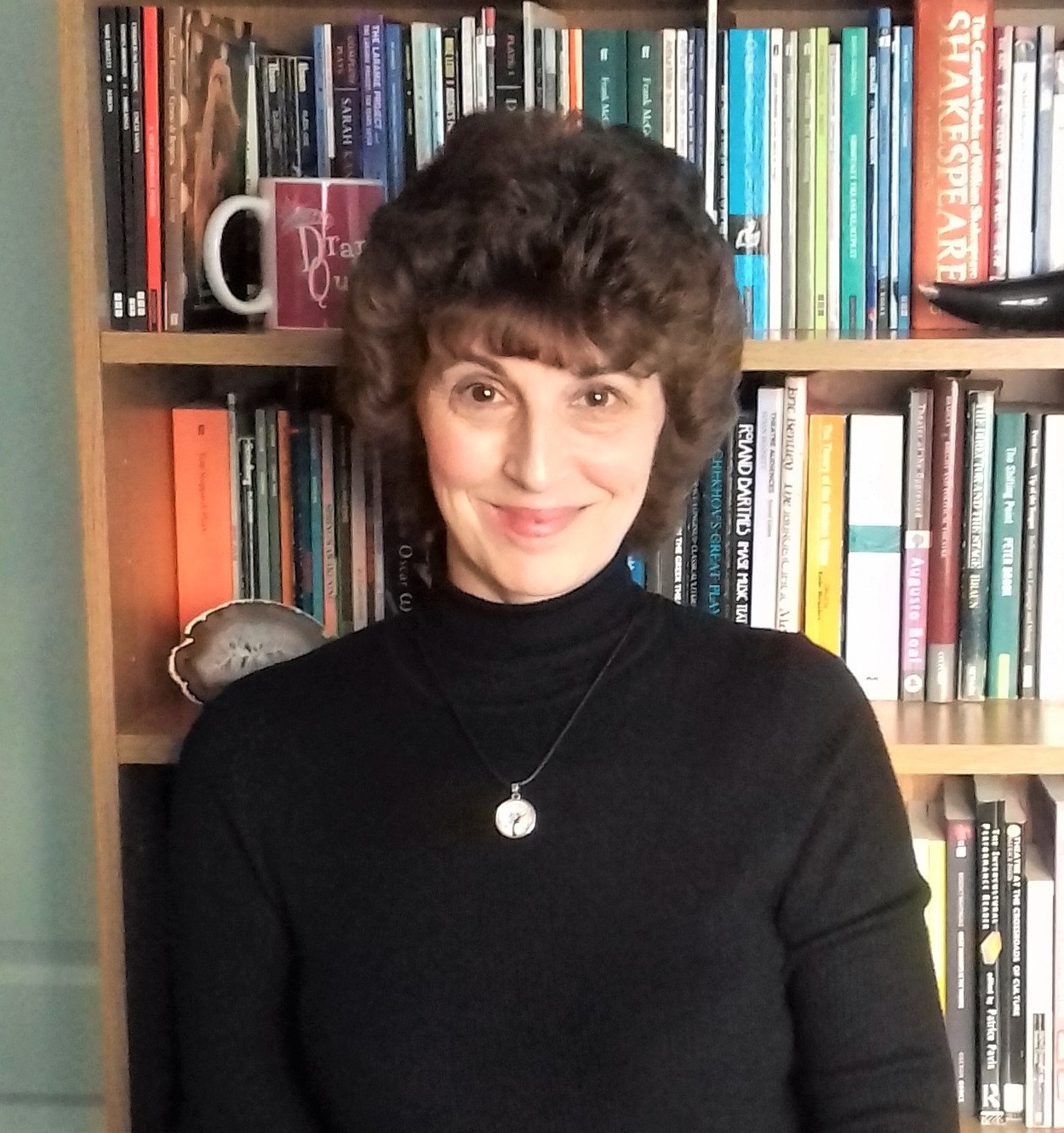 Here's what Angela has to say about How Did We Do?:
I was delighted to learn that my little play had been voted runner up in this year’s Pint-Sized Plays Script Slam – thank you so much! Its inspiration? The persistent requests we get from organisations wanting us to complete surveys and give feedback had been making me weary. It seemed to me that you can’t do a thing – maybe even die?! – without somebody wanting to know how they did!
I wrote the play during the first lockdown, which made me feel smugly productive until somebody told me that Shakespeare had penned ‘King Lear’ while he was quarantined. Although, as far as I know, he was never a runner up in a Script Slam, so...

My Hero by Tony Domaille 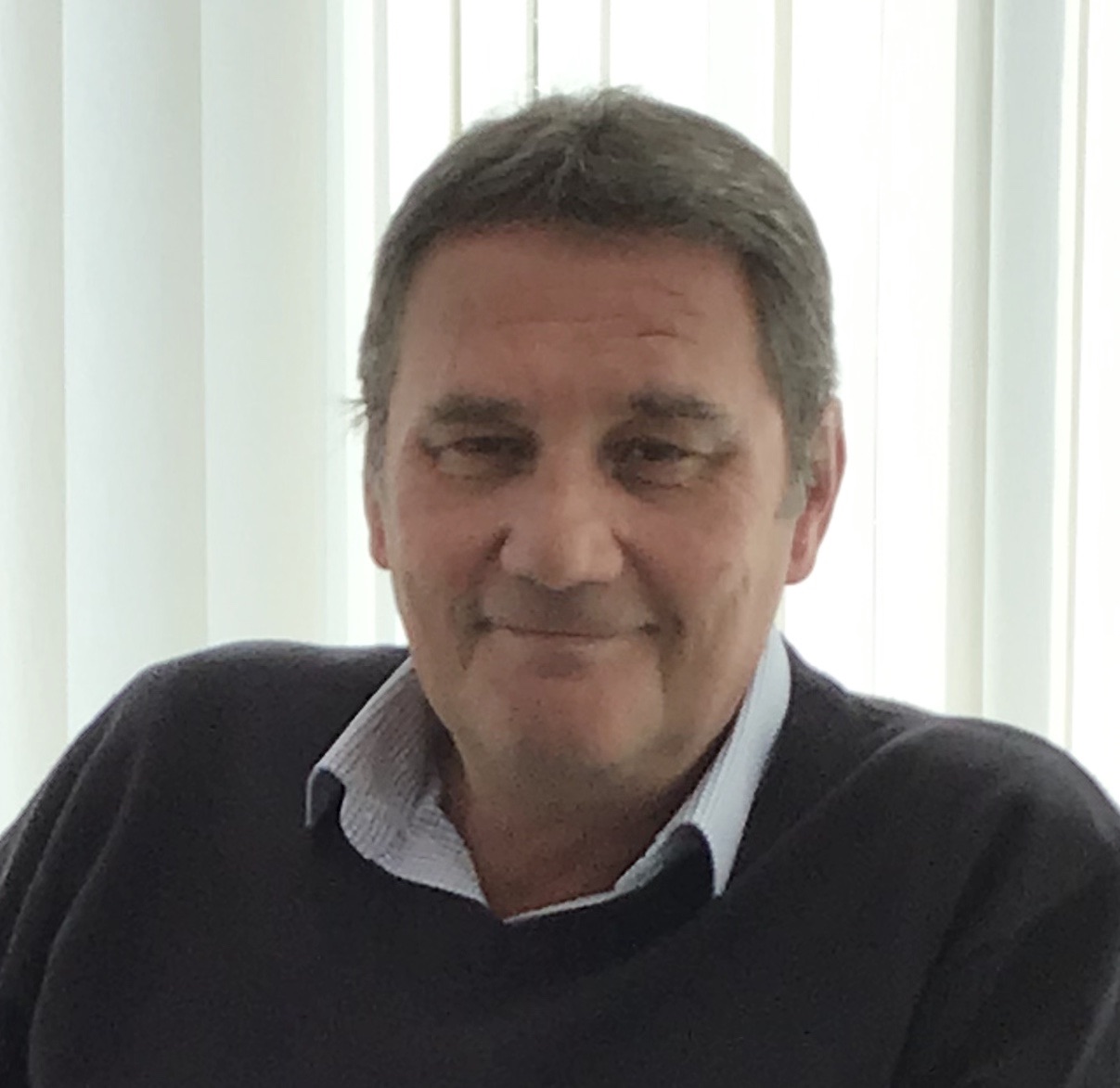 Here's what Tony has to say about My Hero:

The Pint Sized Play competition inspired Tony to start writing short plays in 2016. Since then he has had a number of plays short listed in the competition, and made the final ten in 2018 with Time Travel Agent. He says, ‘I’m delighted and surprised to have won Script Slam 2020 with My Hero because I saw the other finalists! I’m also very grateful for the efforts of everyone keeping Pint Sized Plays going during the pandemic.’

With Journeyman Theatre Productions, Tony has written and produced many ten minute plays in café, bar and hotel settings. He’s now looking forward to adding My Hero to a programme In front of a live audience.

In addition, Peter Richards of Fluellen Theatre Company made awards for the Best Performances in 2020.  Here's his comments:

And the results are:

Roger Leese and Maya Donnelly for Love in Lockdown?, directed by Cynthia Jennings 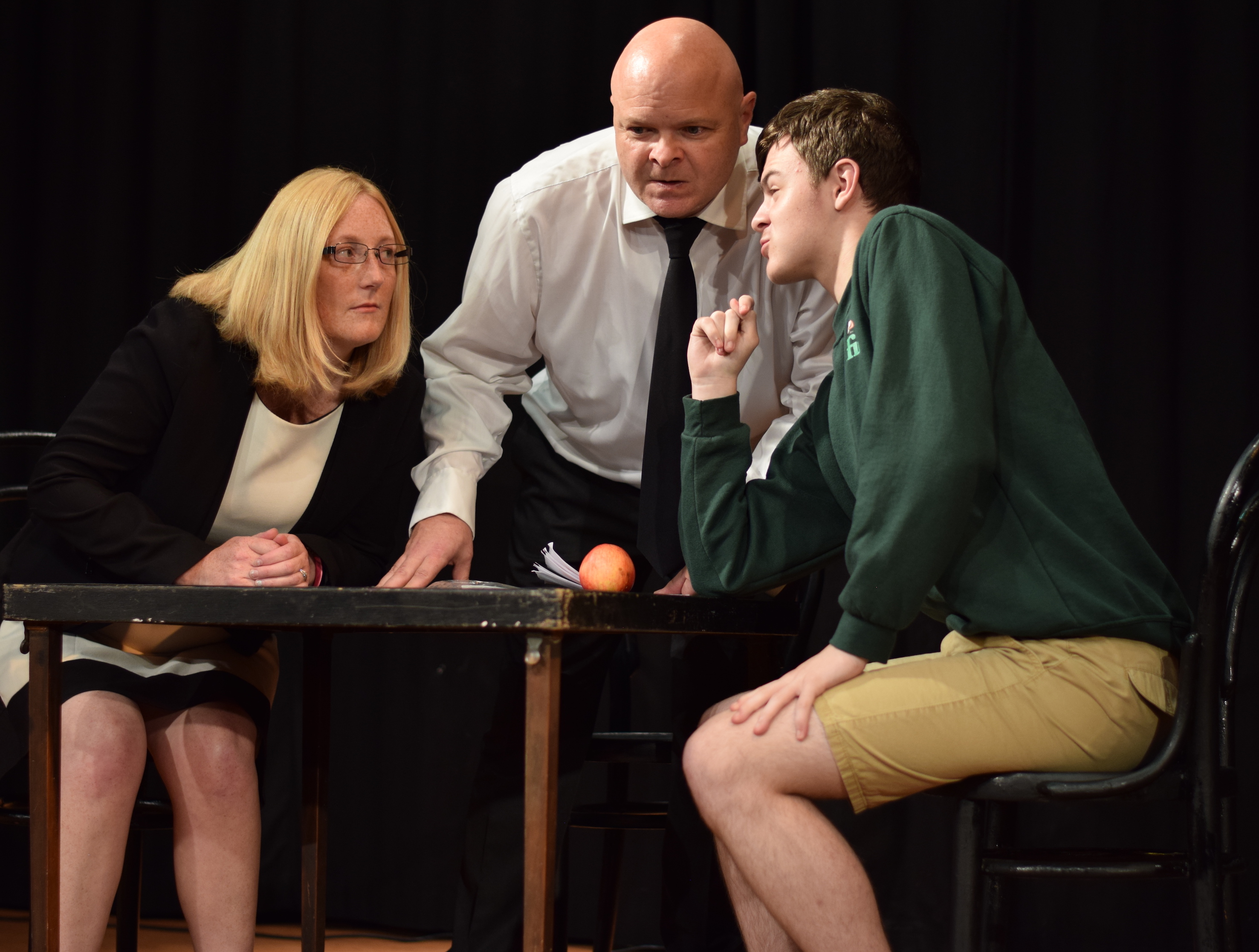 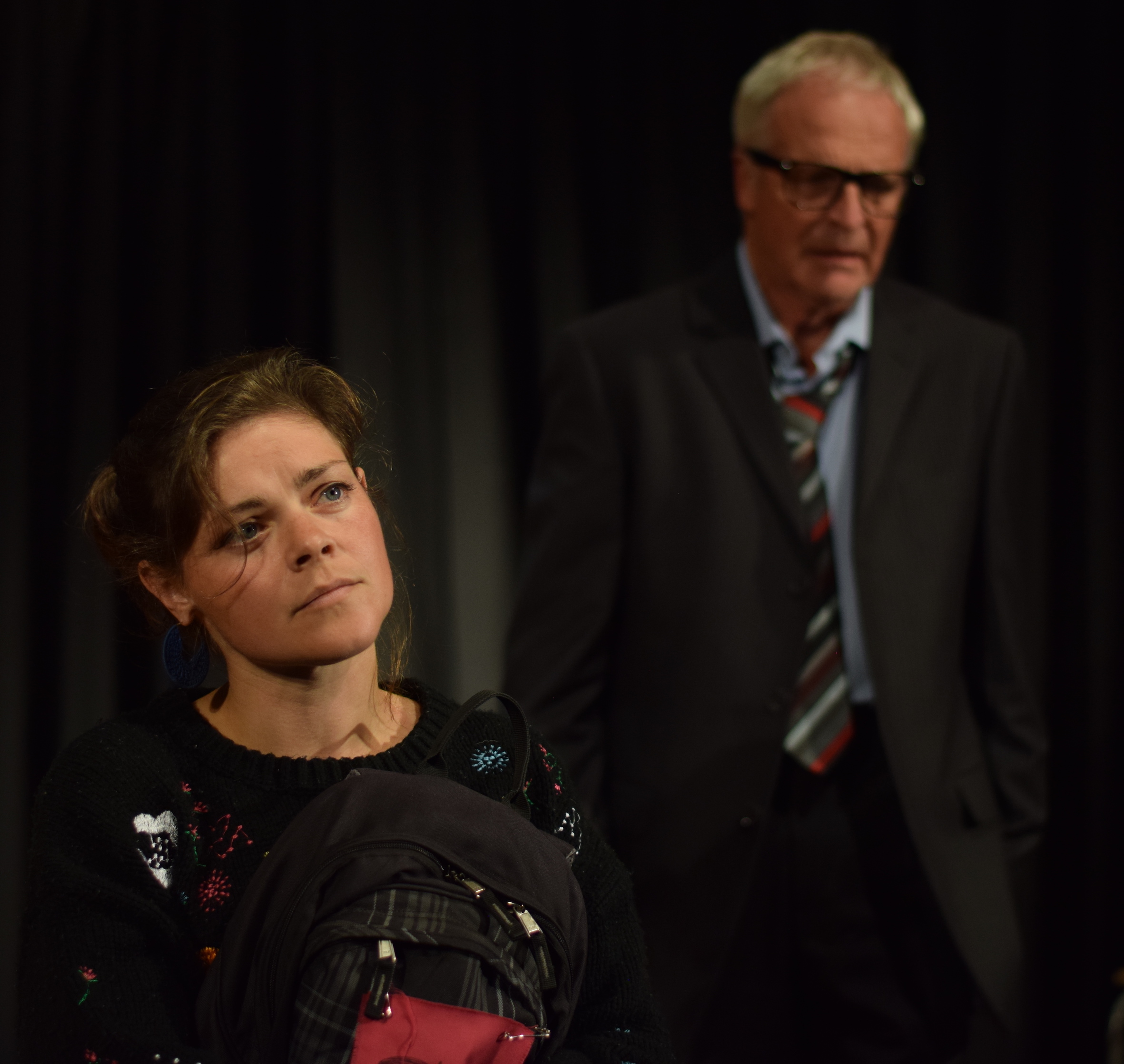 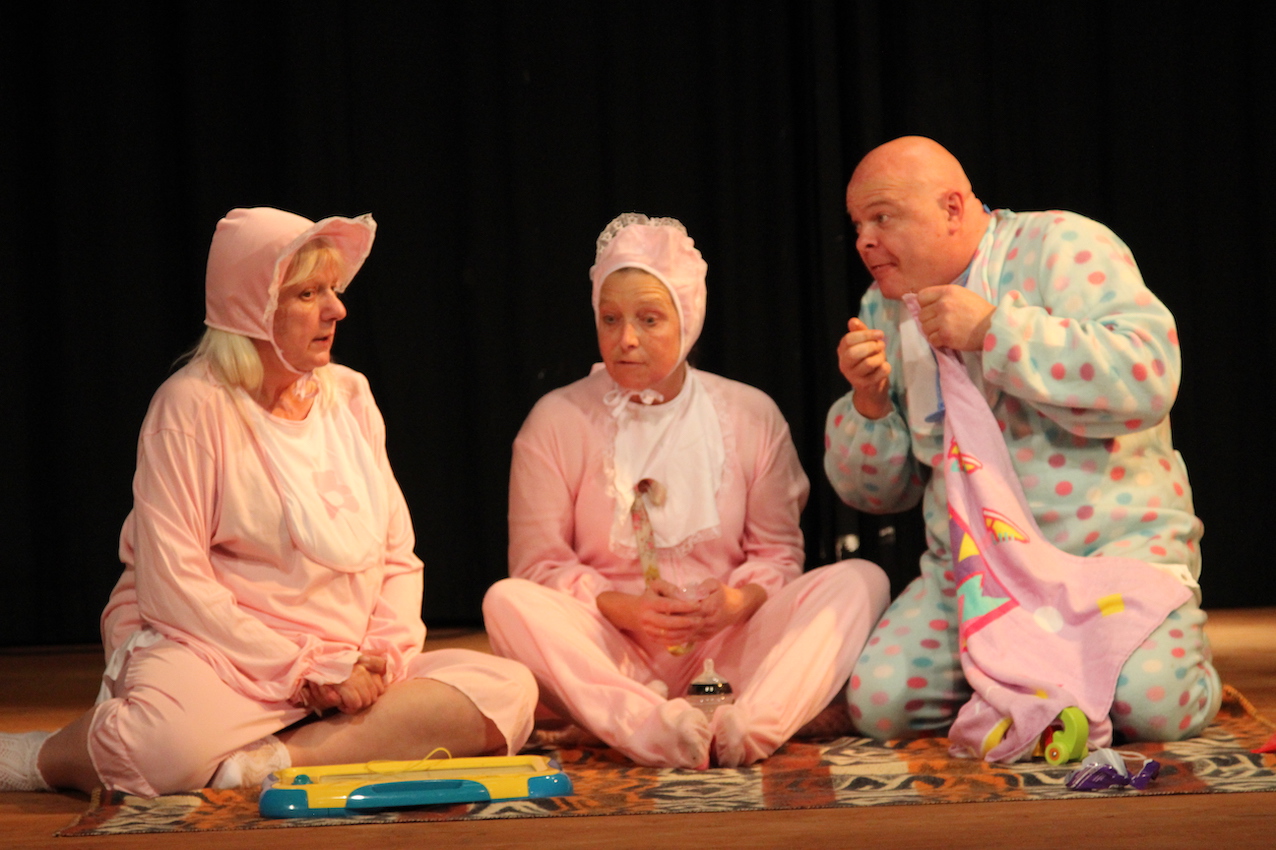 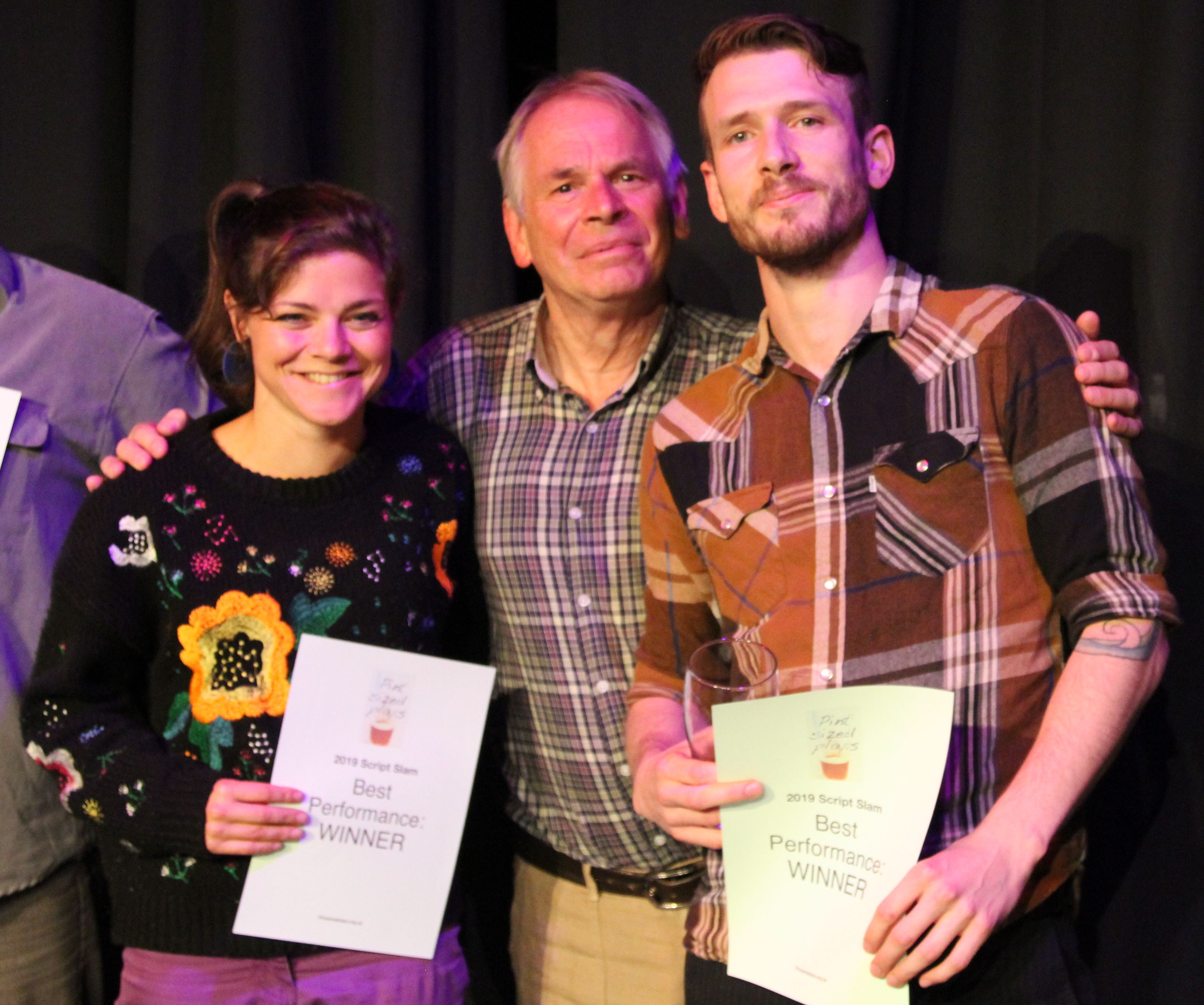 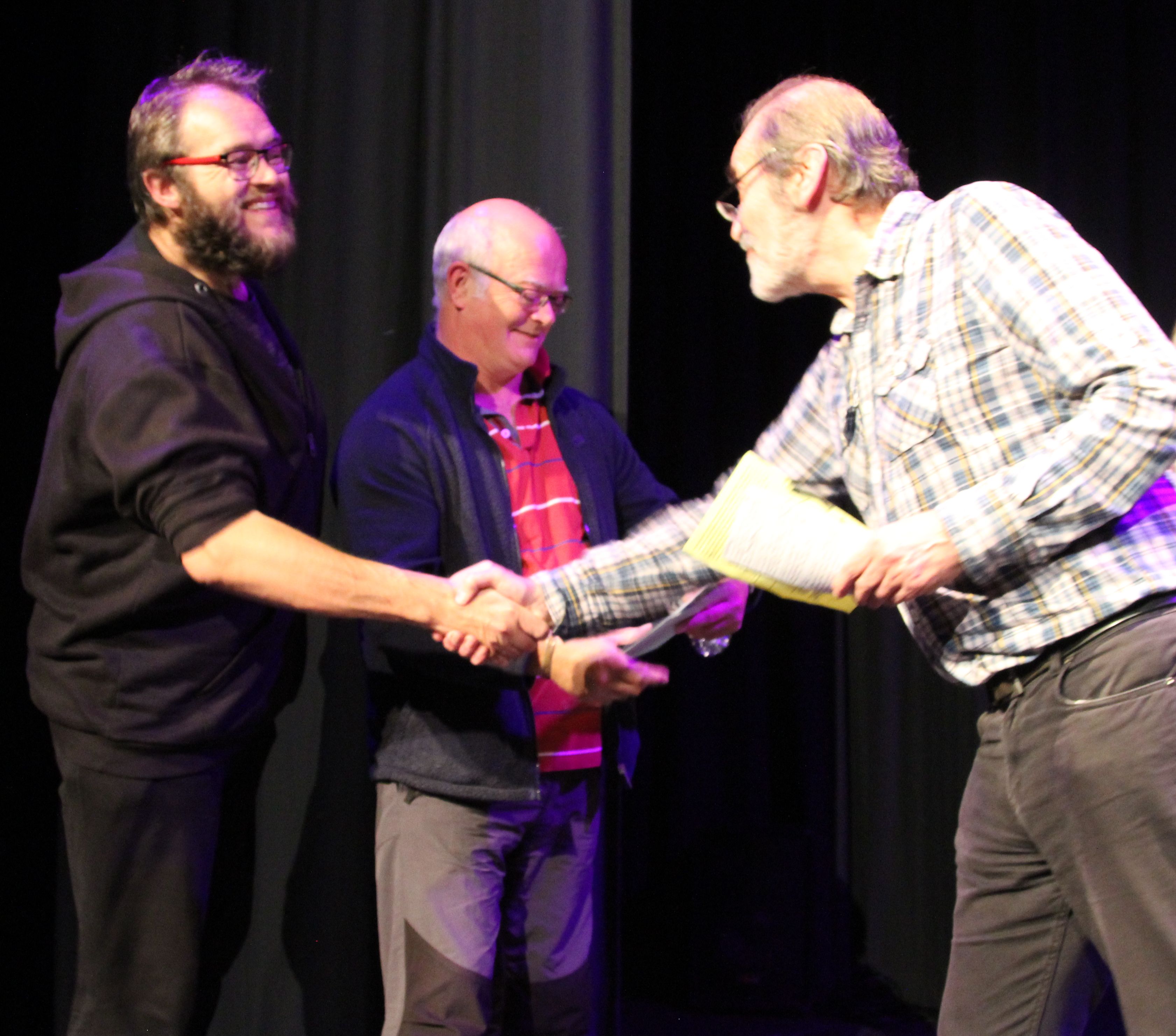 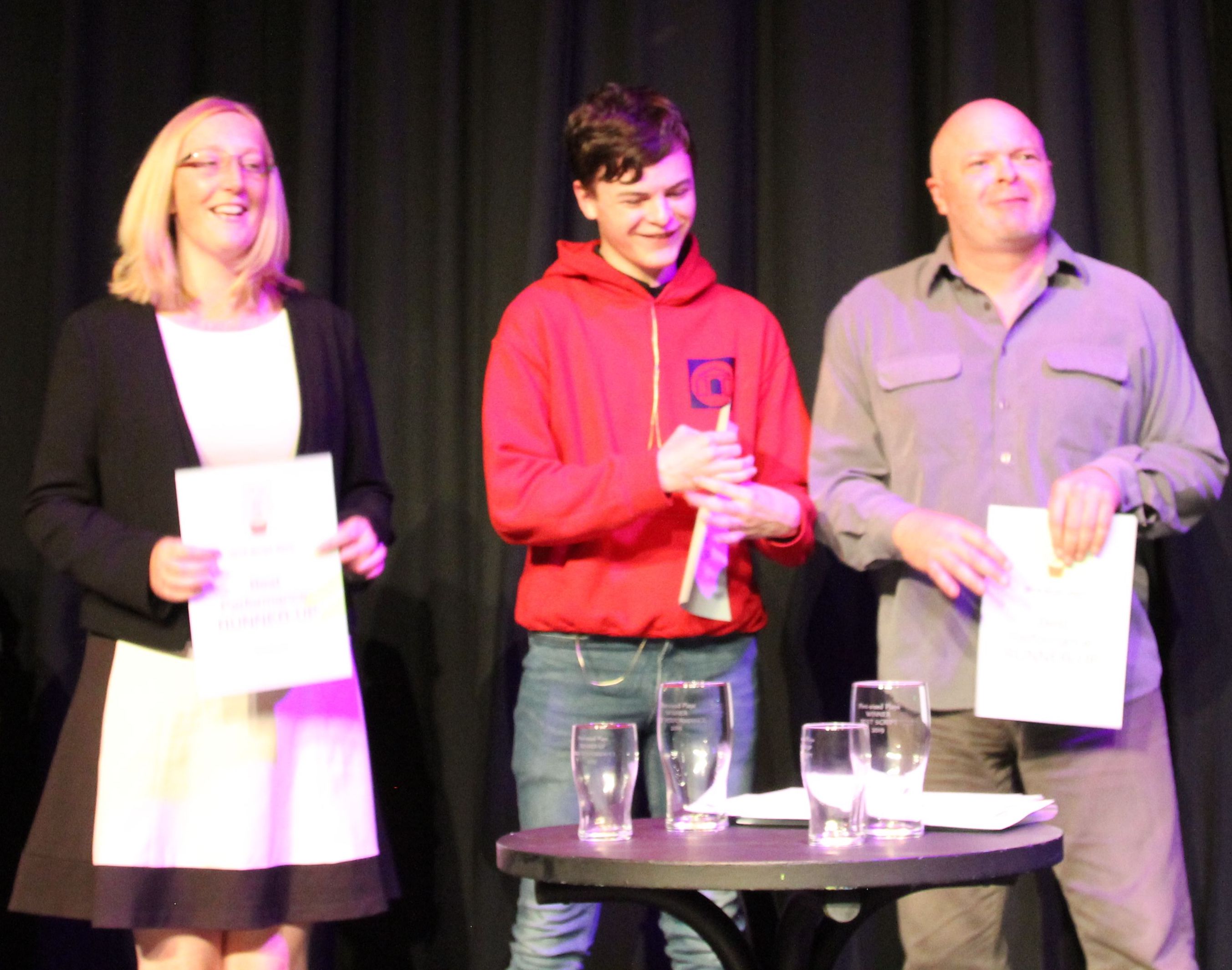 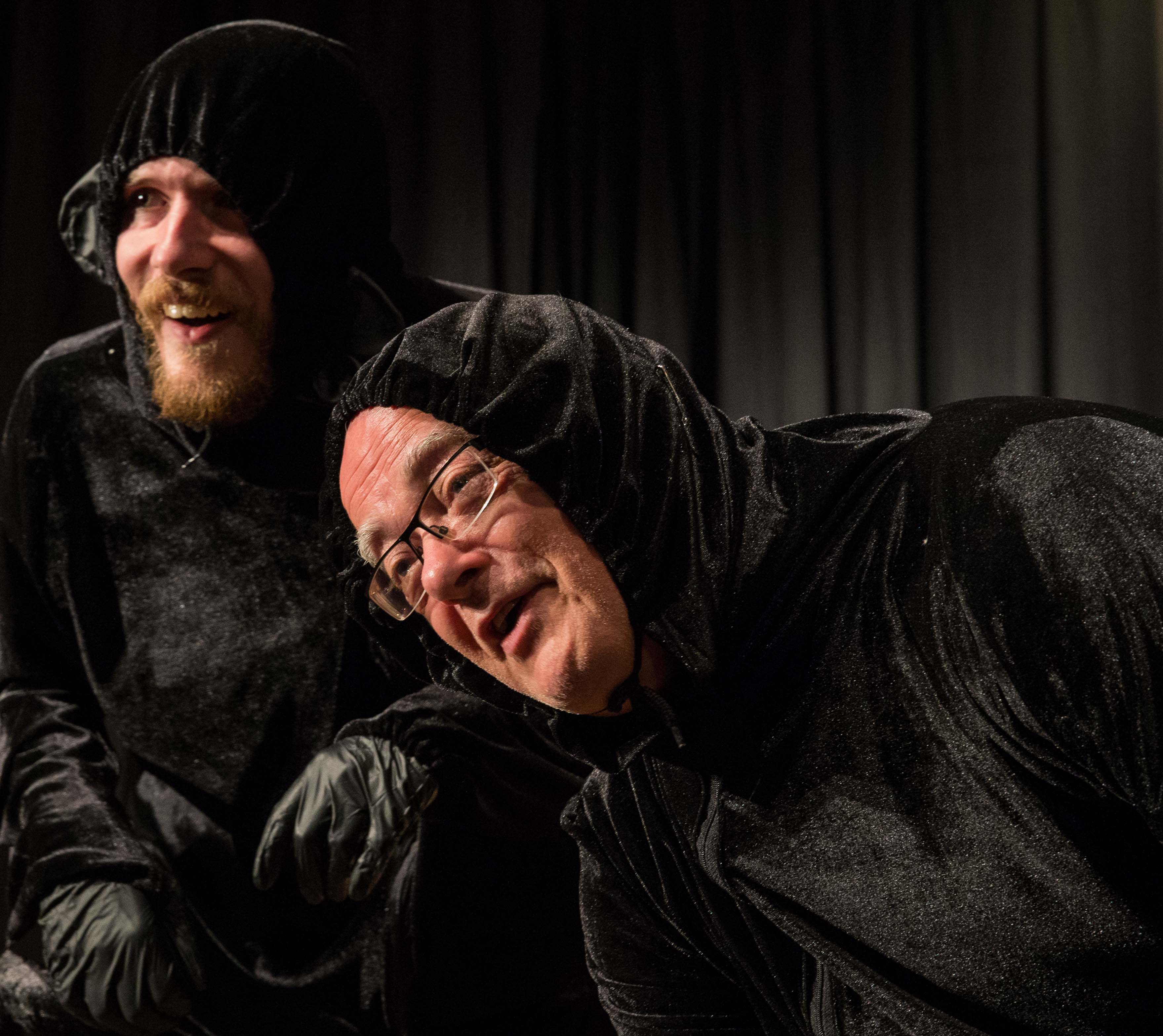 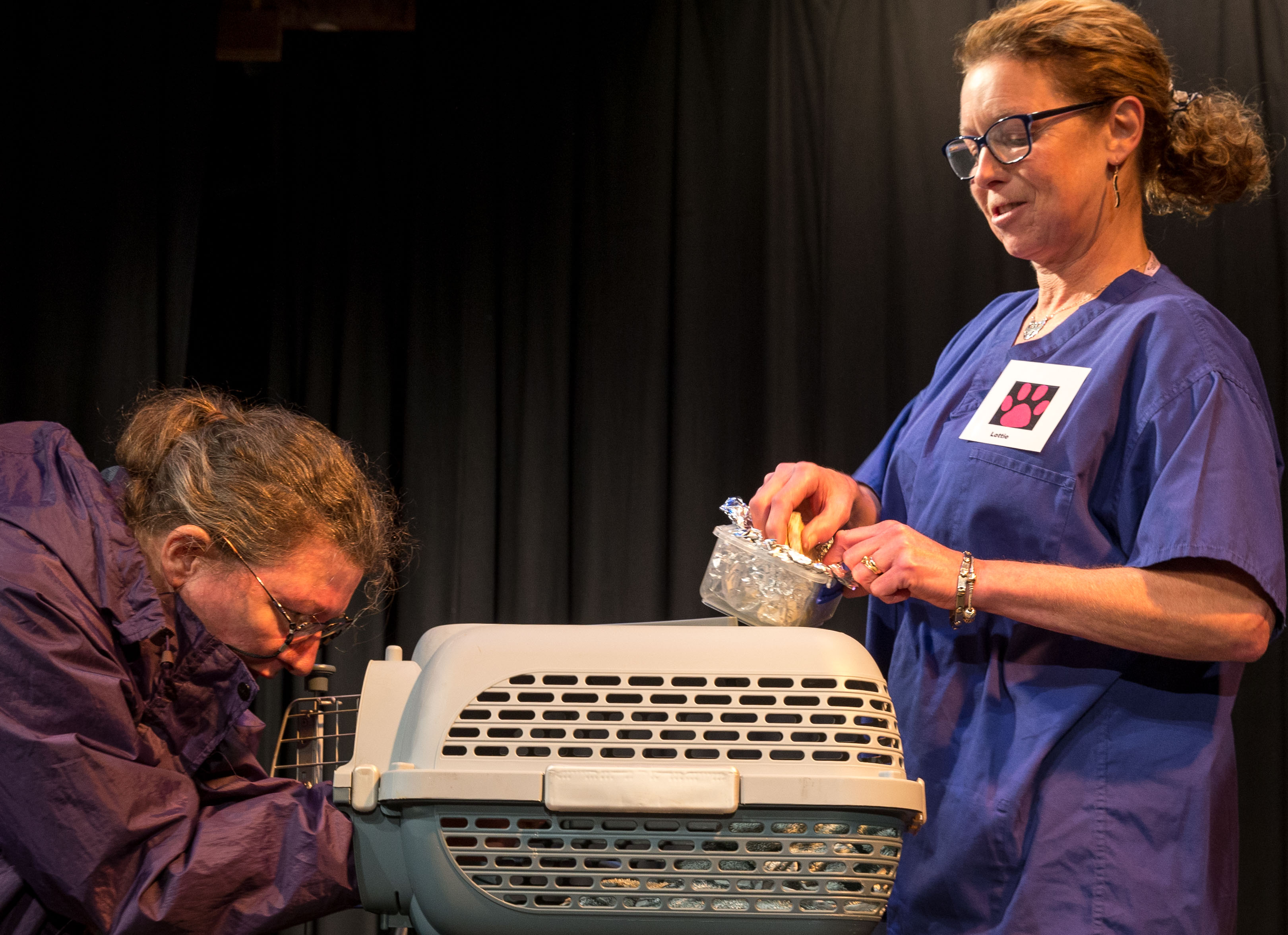 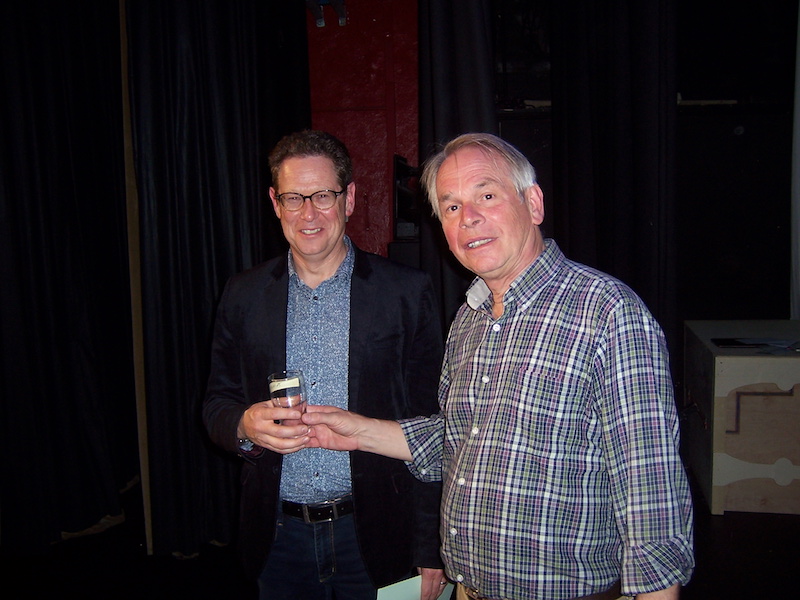 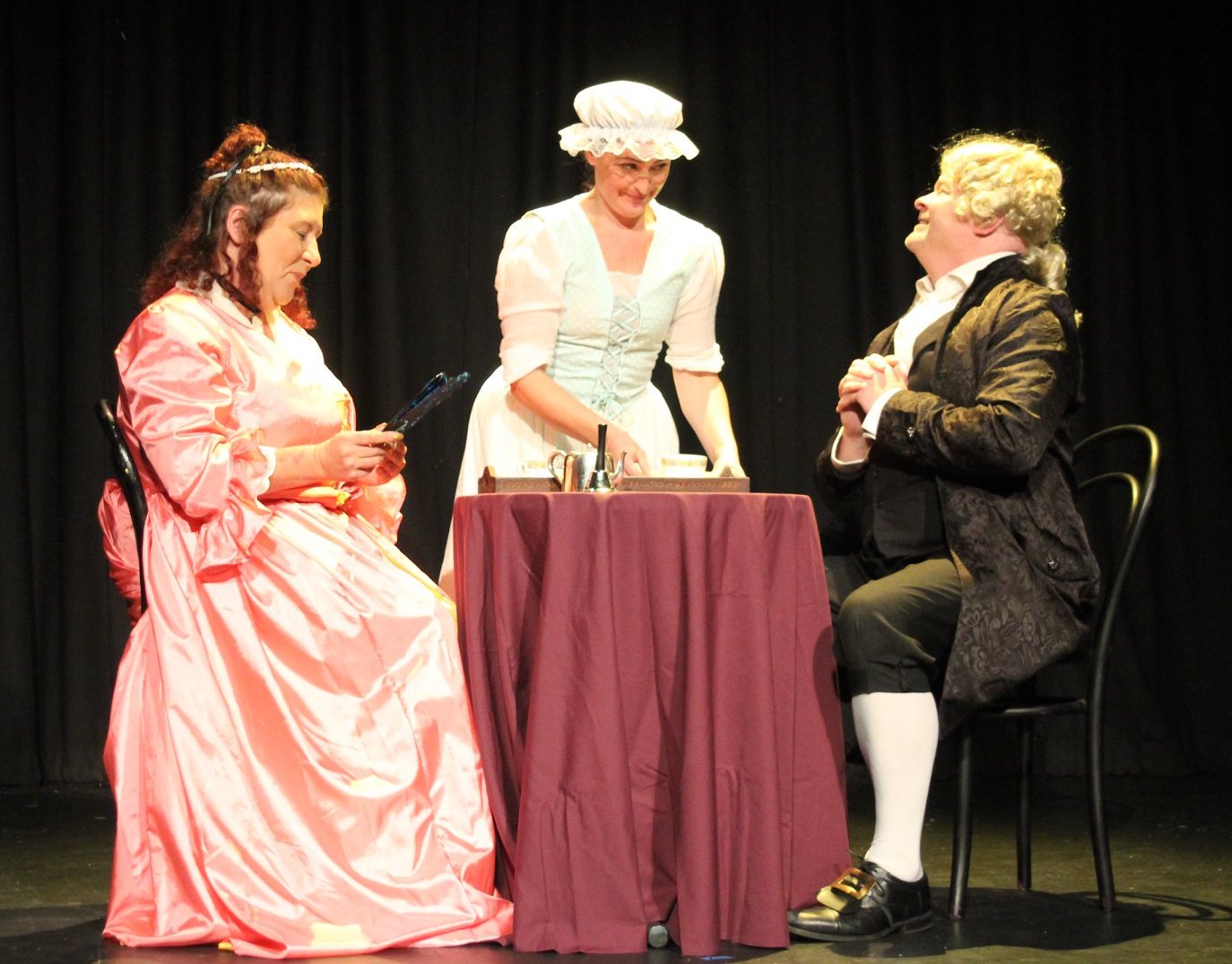 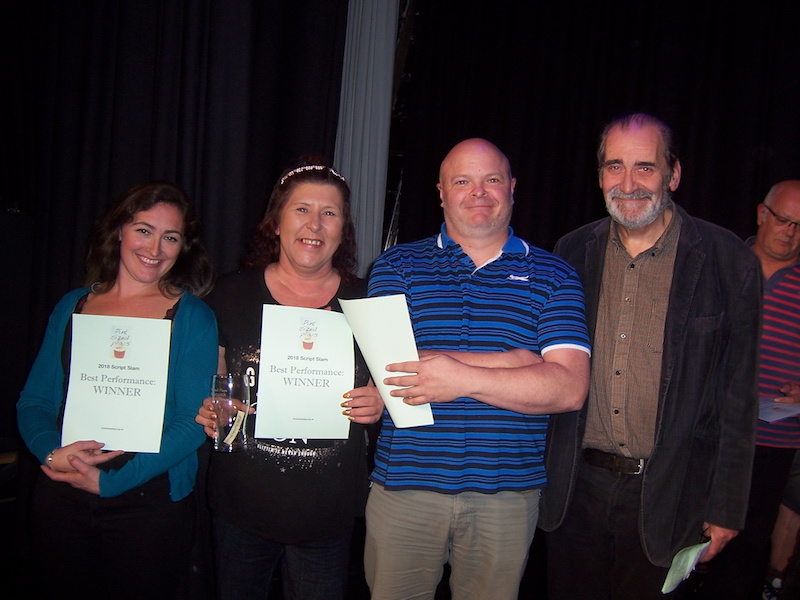 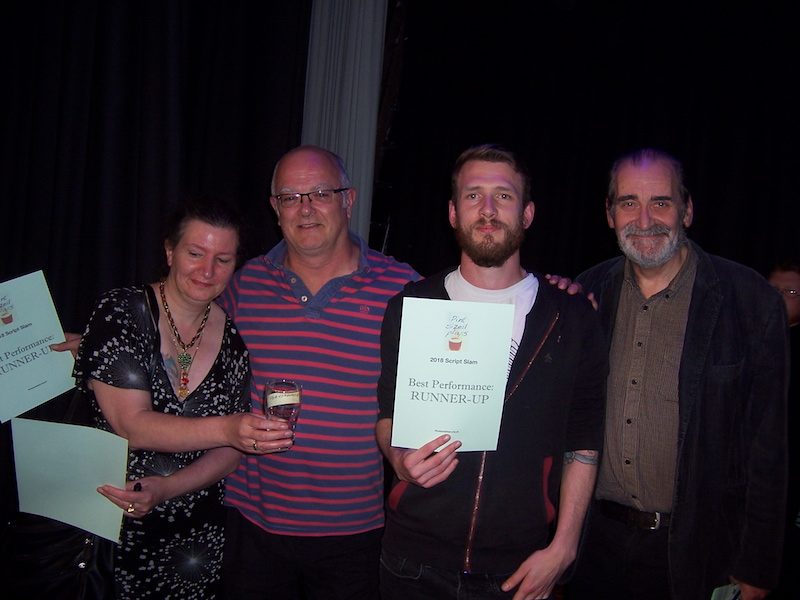 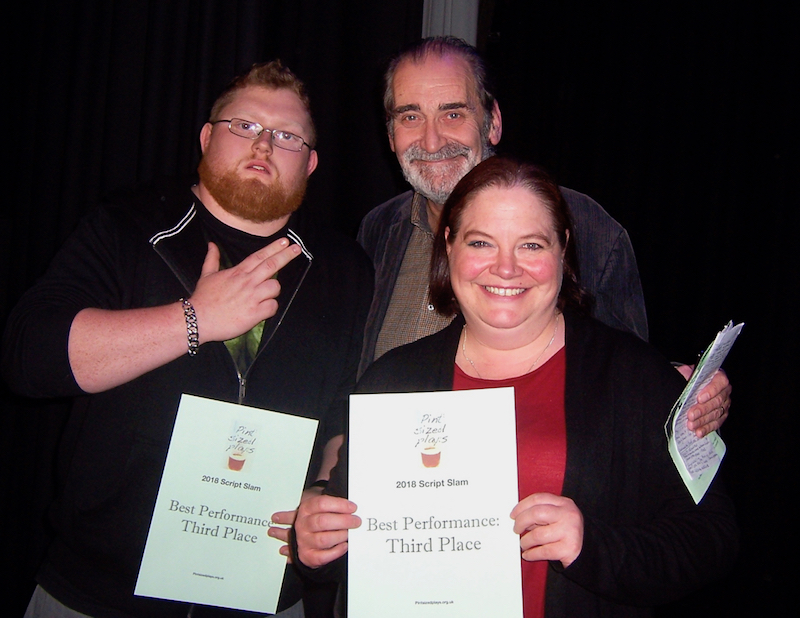 Best Script Award as judged by the audience on the night 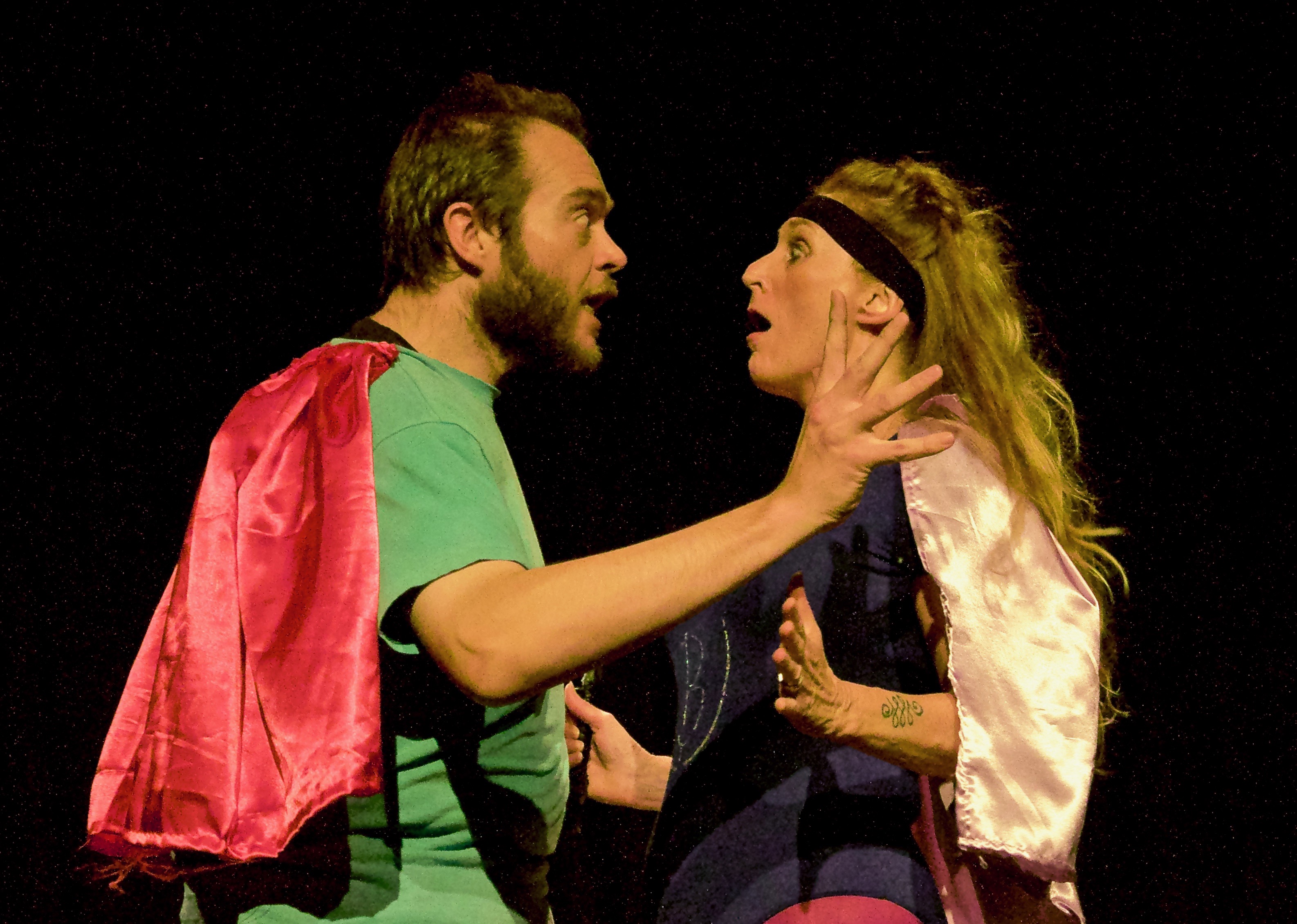 True to You by Nicky Denovan  (Pic by Alec James) 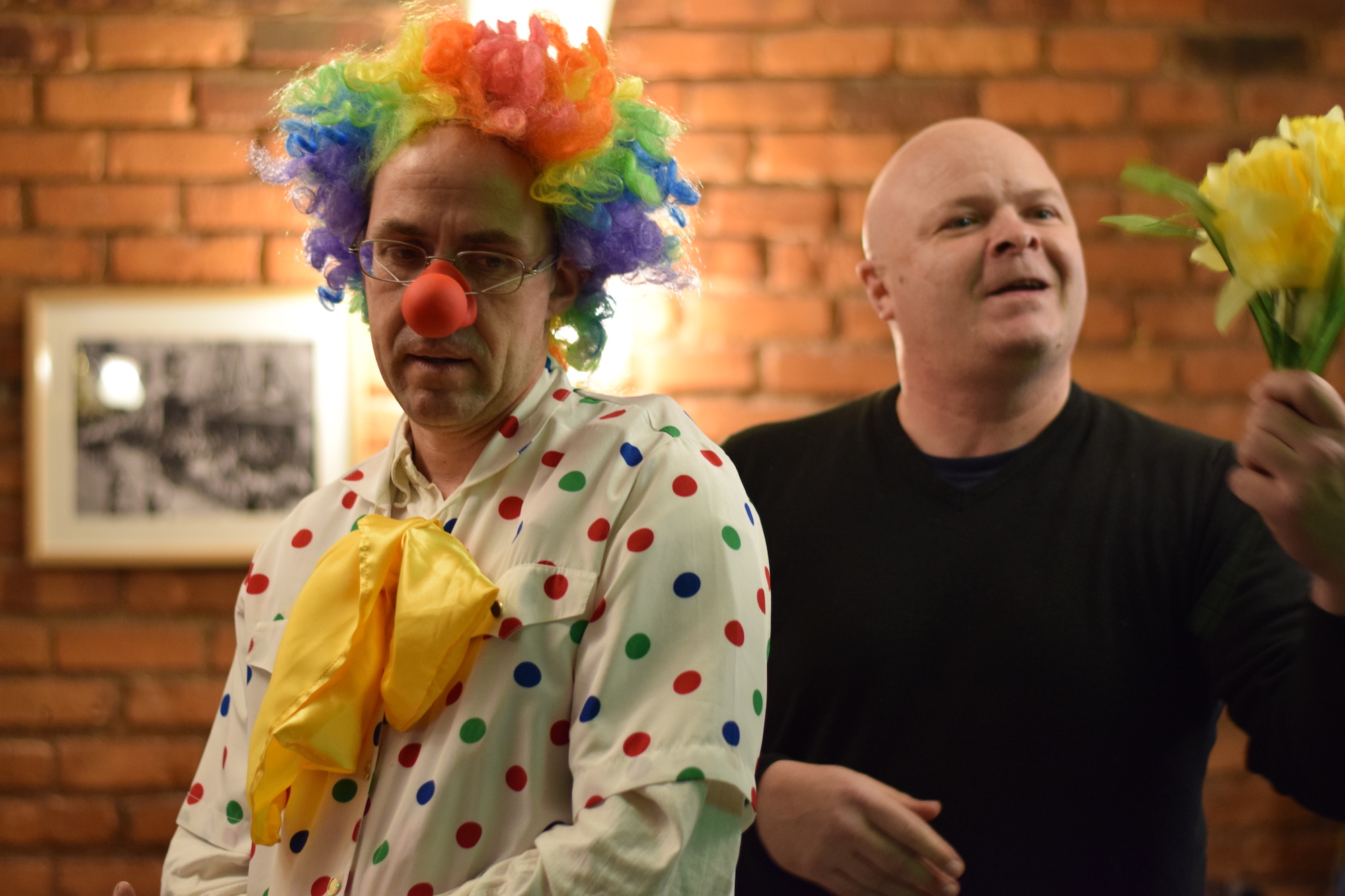 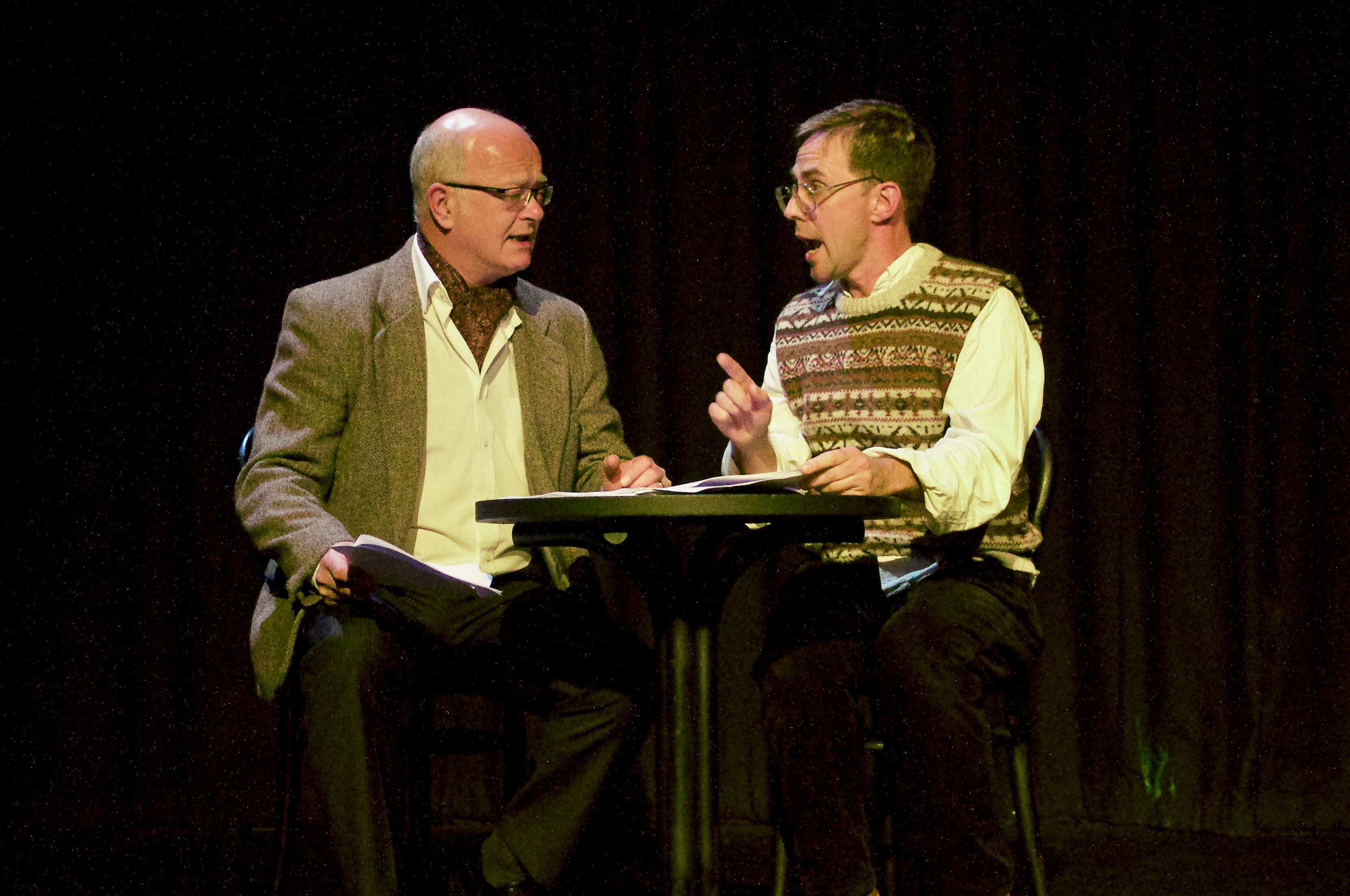 Fagbutt in a Fishbowl by Roy Brown

Never Give Up by James Hutchinson (Pic by Alec James) 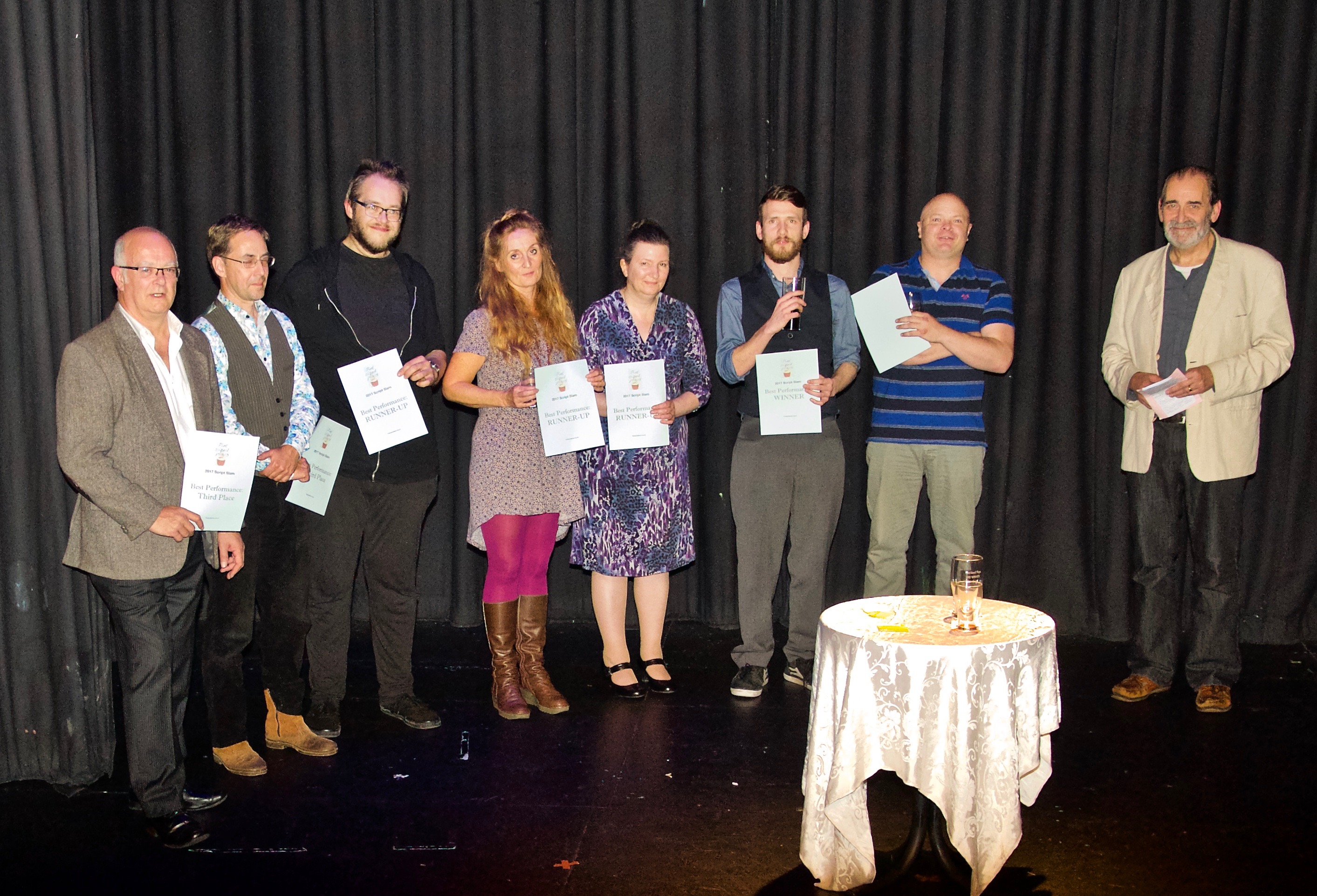 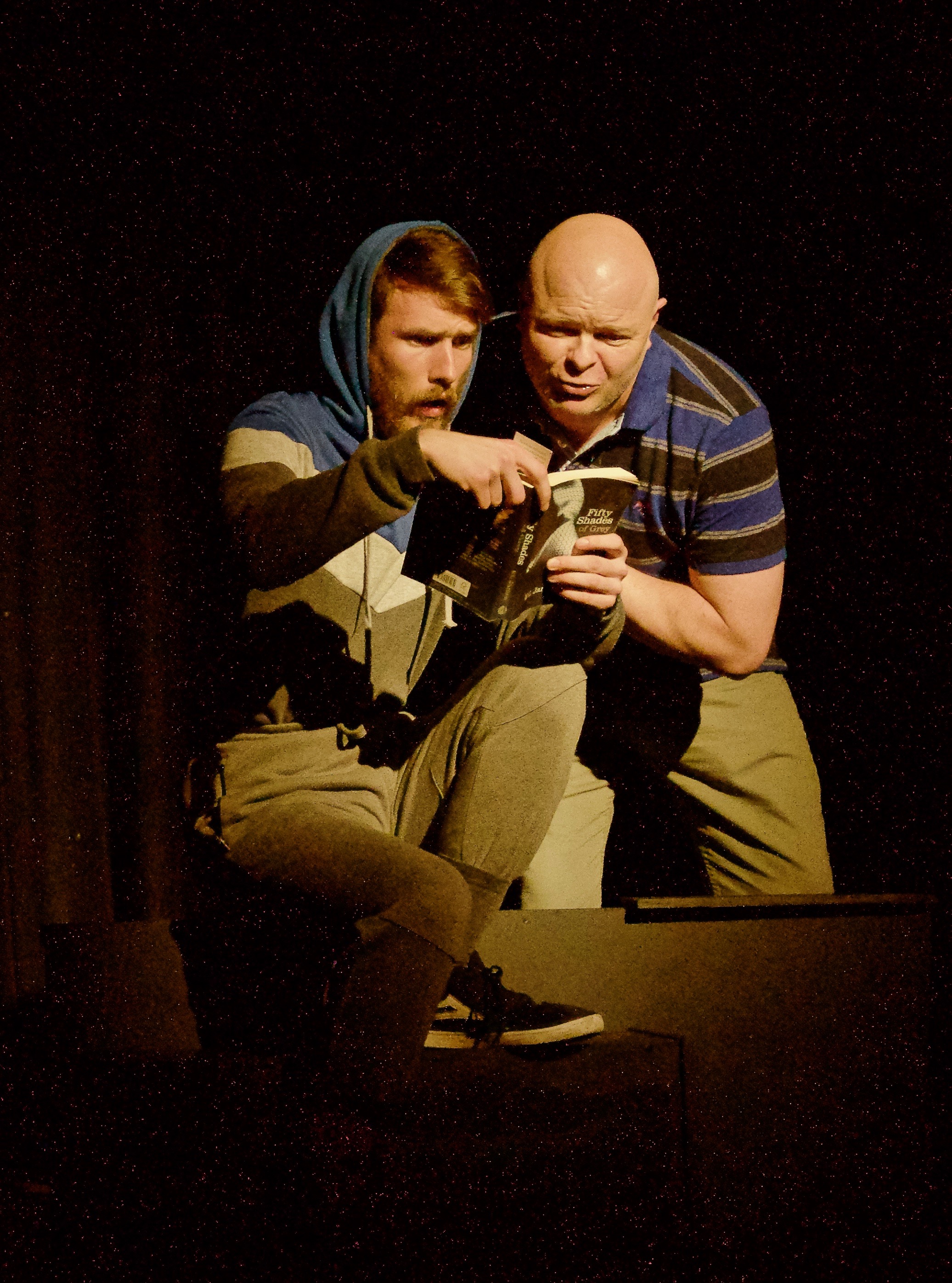 Power of the Sandwich by Grahame Maclean with Nick Wears as Dave and Adam Edgerley as Broderick. Directed by Cynthia Jennings.  (Pic by Alec James)

True to You by Nicky Denovan with Sarah Bishop as Jane, Roger Leese as Richard and Sarah Sherriff as the Waitress. Directed by Sarah Sherriff.

Never Give Up by James Hutchinson with Ben Gabel as Nigel and Gary Crane as Todd. Directed by Derek Webb

Packed to the rafters!  Theatr Gwaun hosted our 9th annual Script Slam for what was a very memorable evening indeed.  Here are the results: 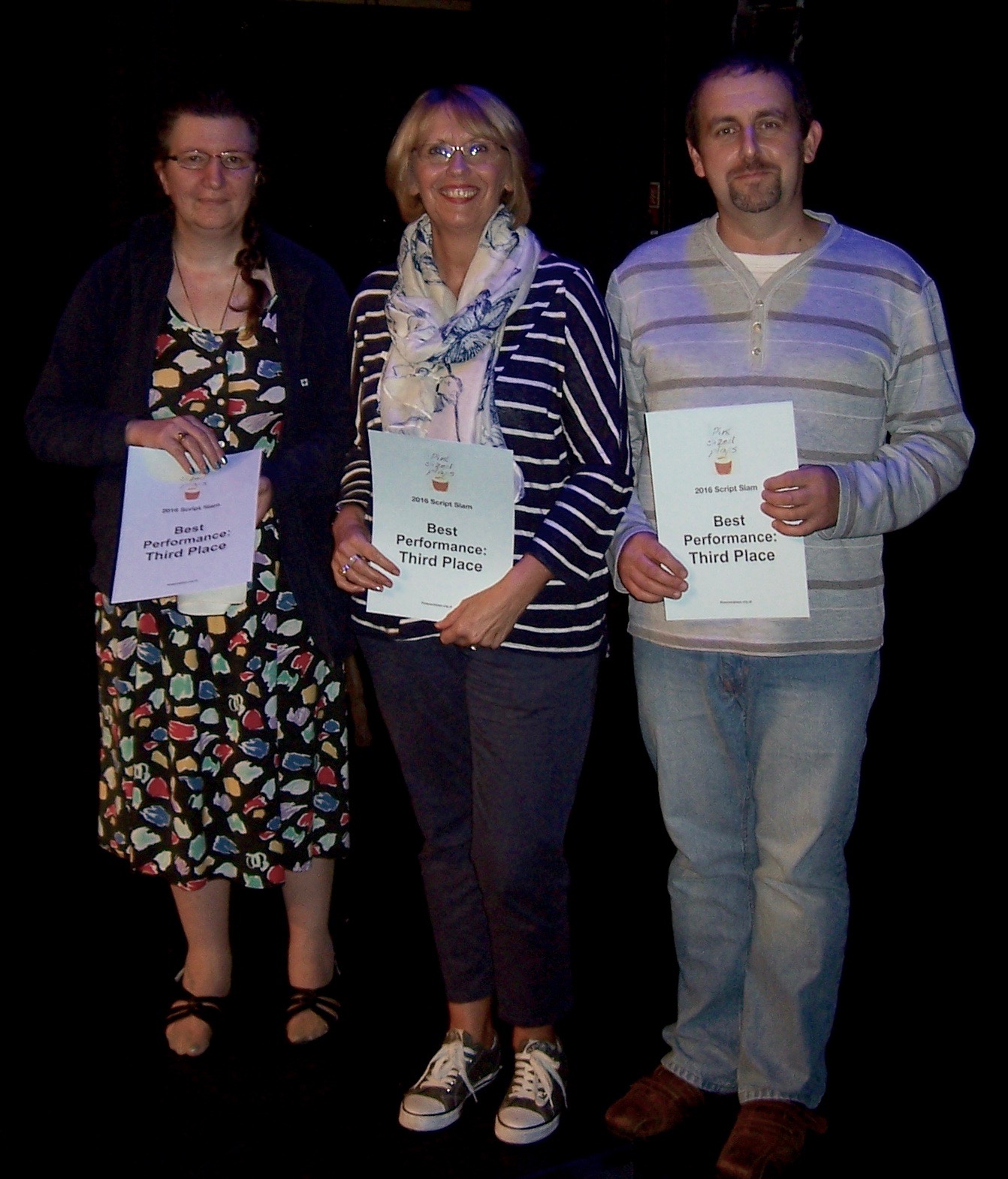 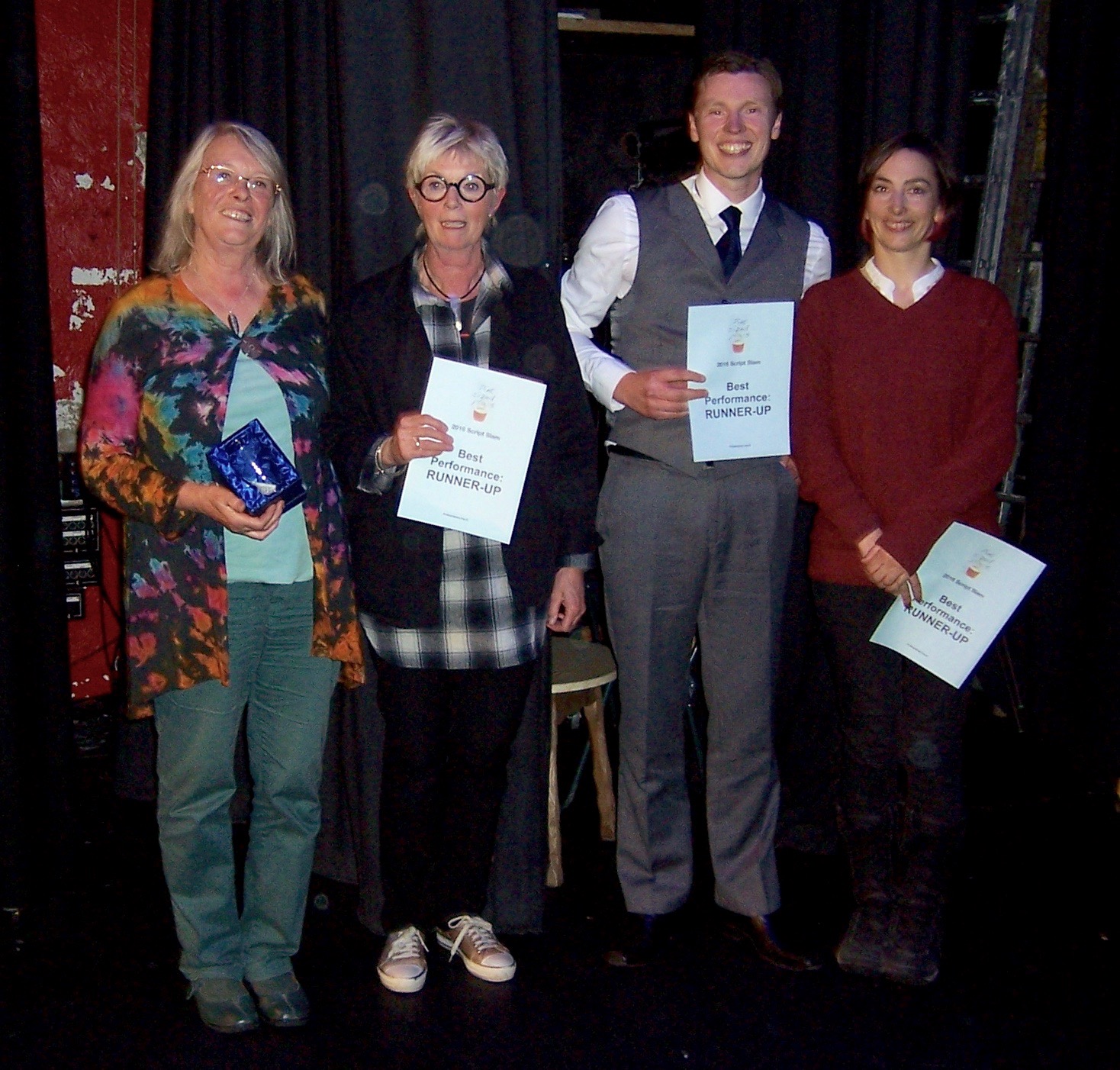 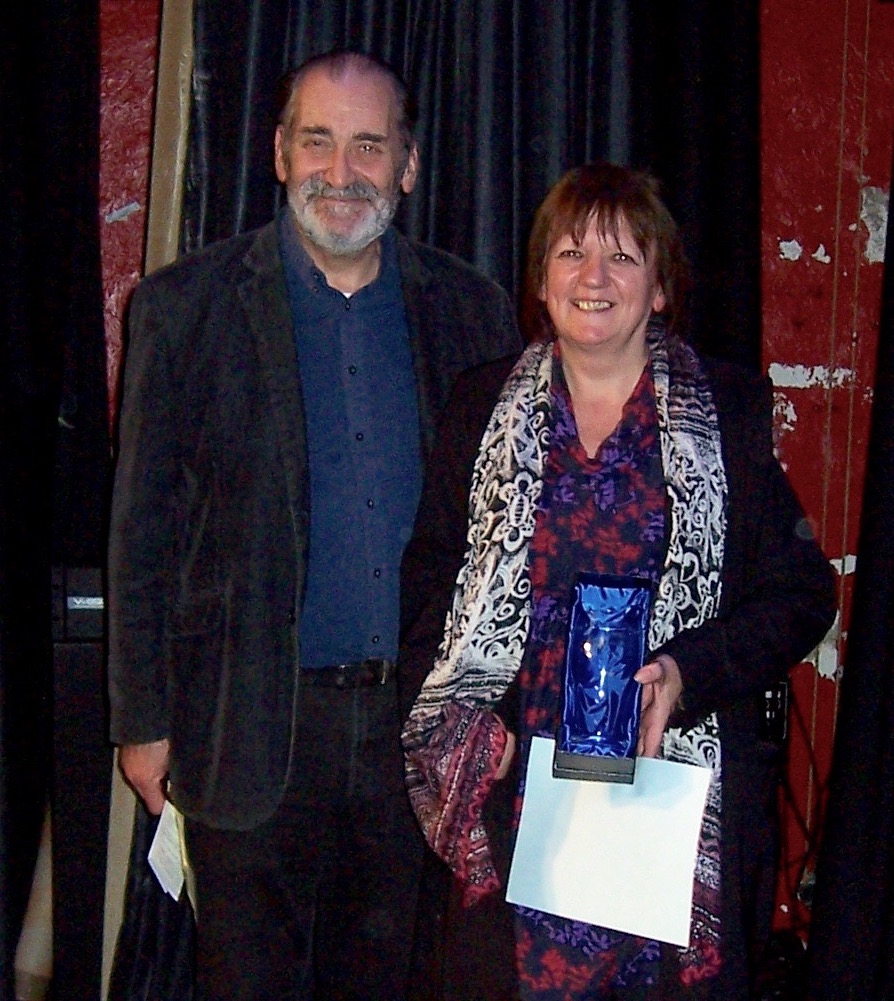 presented by Derek Webb - voted for by the audience
Third Place: 'Two Woofs for Yes' by Neil Walden 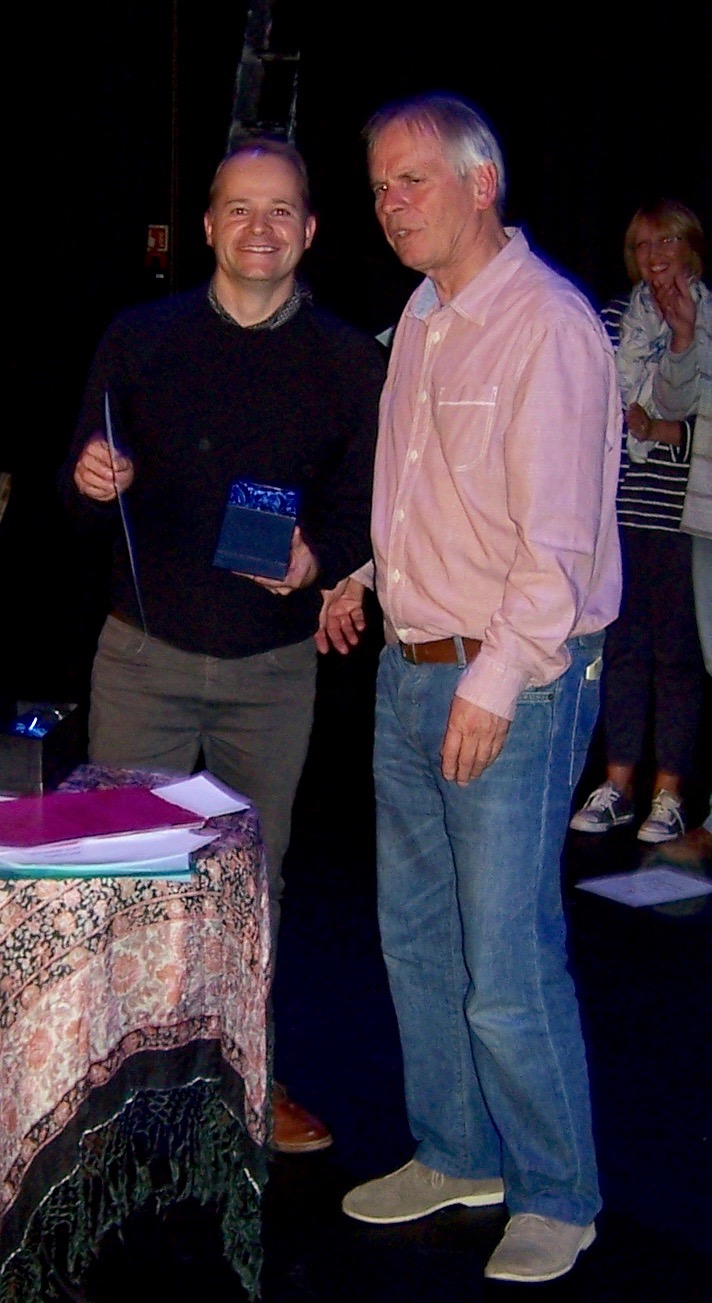 Runner Up, Best Script: A Night to Remember by Andrew Turner 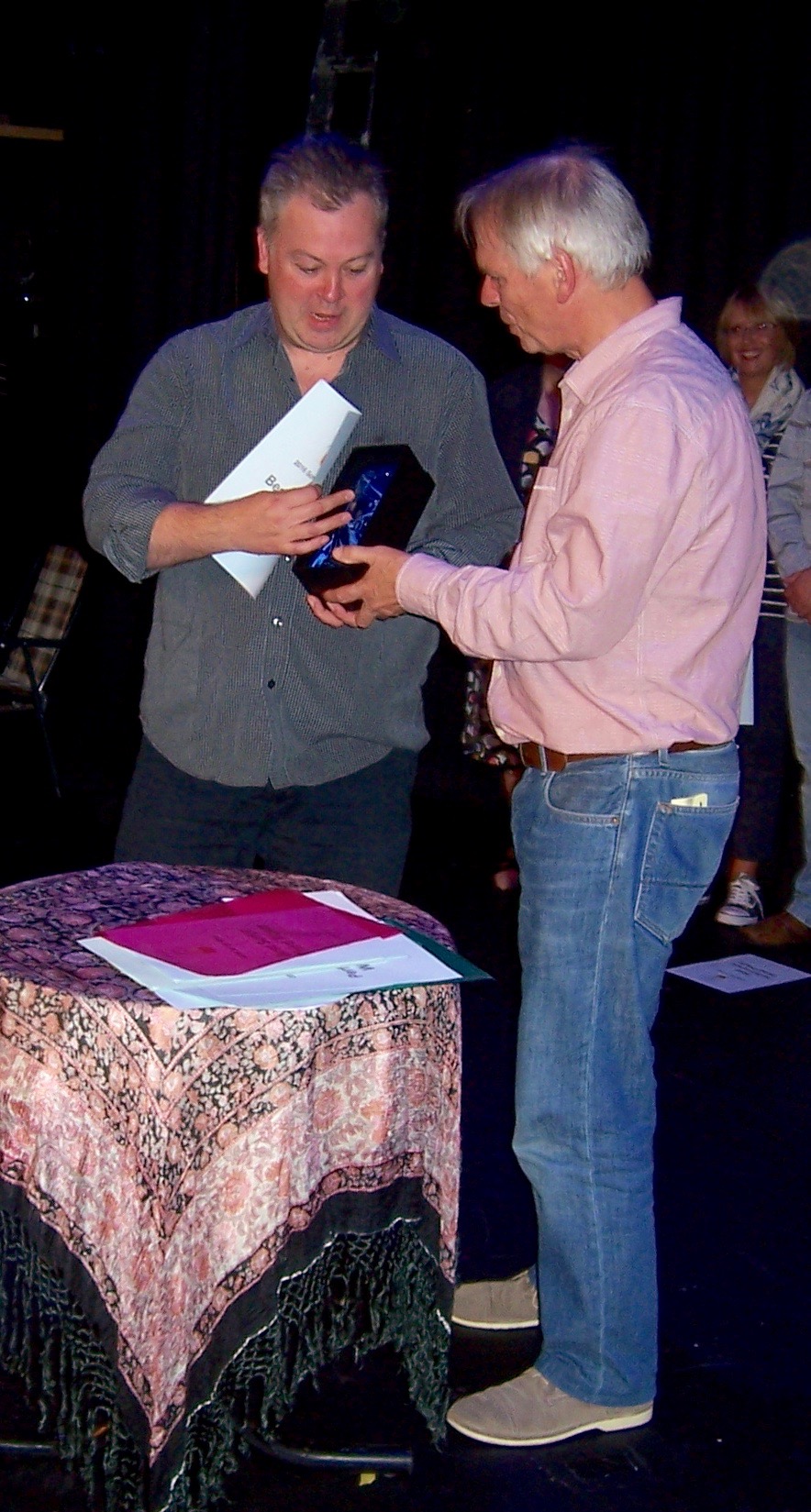